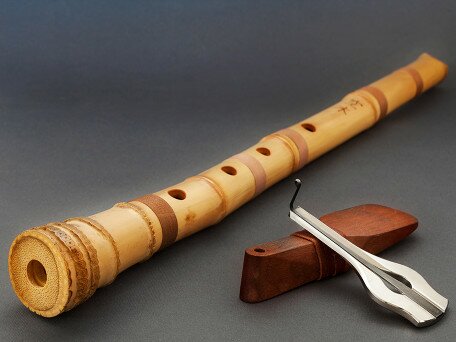 The shakuhachi (尺八), a bamboo flute now considered one of Japan’s representative instruments, came from China in its primitive form in the 8th century (Malm, 2000; Wade, 2005).

The Chinese original called the chiba (尺八) has almost disappeared in its birth place, even though other vertical flutes, such as the xiao with a closed mouthpiece and the dong xiao (nan xiao) with a notched mouthpiece, are still popular there (Thrasher, 2008). In the last decade, however, there has been a “revival” of the shakuhachi in China, and an increasing number of Chinese shakuhachi players, teachers, and instrument makers actively offer lessons and concerts. The International Shakuhachi Festival is a quadrennial event that has previously been held in New York, Boulder, Sydney, Kyoto, and London. The next will be in Chaozhou in 2022.

The shakuhachi is widely practiced and appreciated outside Japan (Keister, 2004; Matsunobu, 2011; Strothers, 2010). The presence of non-Japanese practitioners is evident in today’s thriving international shakuhachi scene (Smith, 2008). With an expansion of international adherents and the rise of multilingual spaces, the shakuhachi has seen changing boundaries of membership and changing notions of musical identity and musical ownership (Matsunobu, 2009).

Understanding the Relationship between Interlanguage Pragmatic Learning Strategies and Pragmatic Competence in Chinese as a Second/Foreign Language: A Cross-regional Comparison in Asian Contexts