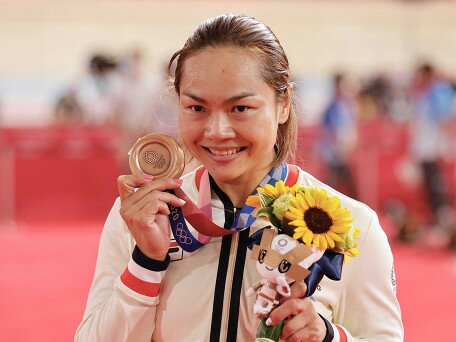 Sarah Lee Wai-sze, Honorary Fellow and alumna of The Education University of Hong Kong (EdUHK), took the bronze medal in the women’s sprint, bringing Hong Kong's medals total to six, on the final day of the Tokyo Olympics (8 August 2021) .

President Professor Stephen Cheung Yan-leung congratulated Sarah for her success, and for being the first Hong Kong athlete to win medals in two different Olympic Games. He commended Sarah for demonstrating her unswerving commitment and perseverance in the pursuit of excellence, something which touched the hearts of the people of Hong Kong.

“Sarah has set an exemplary example by demonstrating great resilience and strength. I hope our students will see her as a role model on the path to achieving their own goals,” added Professor Cheung.

Sarah’s achievement is particularly remarkable as she has also continued with her studies while devoting herself to sport. She graduated with first-class honours in the Bachelor of Health Education programme at EdUHK in 2017 and was presented with an honorary fellowship by the University in 2019 in recognition of her achievements in sport.