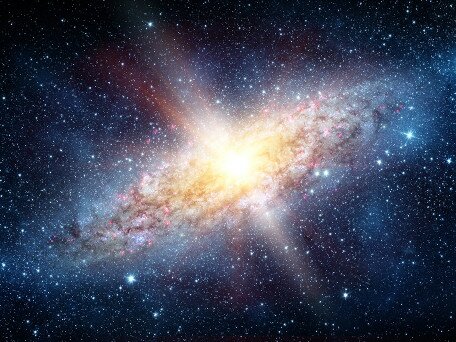 Dark matter is the most intriguing scientific mystery that continues to captivate the attention of the wider world, as well as engaging the analytical minds devoted to studying astrophysics and particle physics.

Abundant observational data suggest that this unknown matter exists in our universe and that none of the existing particles we know of have the unique properties of dark matter. Various candidates of particles have been proposed over several decades to explain the composition of dark matter. Specifically, one class of candidates called weakly interactive massive particles (WIMPs) has been the most popular as a possible candidate in hypotheses on the subject of dark matter in recent years, though some experiments appear to have achieved only null signal so far. We know that dark matter particles do not interact with ordinary matter, which makes its detection extremely difficult. However, if dark matter particles were able to self-annihilate as predicted by theoretical models, large amounts of high-energy particles would be produced.

In this project, we propose to analyze the radio continuum spectral data of galaxy clusters previously observed to search for signals from dark matter annihilation. New radio data of several galaxy clusters will also be observed with a wide range of frequencies using the Nanshan Radio Telescope. We have developed an effective method to differentiate between cosmic ray emissions and emissions of high-energy electron-positron pairs originated from dark matter annihilation using the radio continuum spectral data of galaxy clusters. It is possible for us to detect signals of dark matter annihilation using our developed theoretical framework. If any dark matter signals can be identified, we will be able to significantly further our understanding of the nature of dark matter, and facilitate the discovery of new particles in future collider experiments.

Learning to Listen in EMI: The Effects of Strategy Instruction on Strategic Behaviour and Learner Uptake