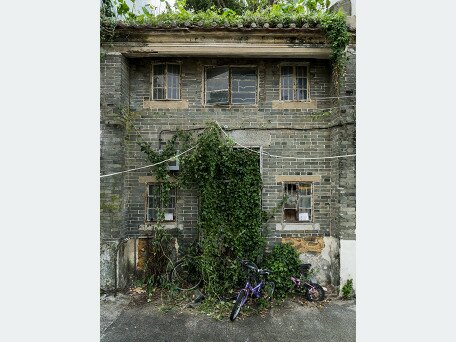 The study looks at how the making and sharing of imagery can foster dialogue and analyse the current state of flux of these villages and their lands to reconsider the ‘place’ they occupy how these changes may affect visual cultural identity and connections with the past.

Twenty years after its 1997 handover back to China Hong Kong remains a unique place on the world’s stage. British colonialism has left many enduring marks on Hong Kong identity as well as on its physical landscape. One of the most peculiar, and controversial, is the legacy of the Small House Policy of the New Territories; an agreement reached between the British and the village leaders after it leased the New Territories in 1898. In a city of severe land scarcity, this unusual law grants decedents of ‘original villager’s’ families (mainly Hakka people), upon their 18 birthday, rights to build a maximum three story house of no more than 2100 sqft. With skyrocketing housing prices downtown this has created a boom of these ‘village houses’ being build and sold, mainly to ‘new villagers’ migrating from the city, on lands that once were Hong Kong’s farms and rice paddies. This has led to rapid changes in the visuality of these once traditional villages. The most notable visual change among these communities is the disappearance of traditional Hakka ancestral family homes, which are now scattered throughout a maze of stylistically unrelated modern village houses. The vanishing of these unique homes continues at rapid pace and since commencement of a pilot study in the spring of 2018 at least half a dozen additional ancestral homes, some dating back over a century, have been demolished during the summer. This makes the study of these traditional homes, their visual culture, and how they once formed the backbones of these villages all the more urgent. In order to do so this visually driven study employs both audio and visual methods to seek a more in-depth picture of current village life in North Eastern New Territories, Hong Kong by observing, documenting, collaboratively creating, and jointly analysing the multimedia data captured. This study documents the derelict, intact, restored, in ruin ancestral structures, attempting to trace revitalized elements of traditional Hakka villages via their design, layouts, and relationship with the natural environment. The study looks at how the making and sharing of imagery can foster dialogue and analyse the current state of flux of these villages and their lands to reconsider the ‘place’ they occupy how these changes may affect visual cultural identity and connections with the past.