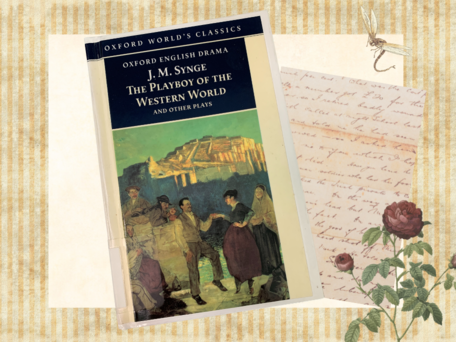 J. M. Synge (1871-1909) was a critically acclaimed man of letters in twentieth-century Irish literature and is most remembered for his plays, such as The Playboy of the Western World (1907) and Riders to the Sea (1904).

This year is the 150th anniversary of the dramatist’s work, which has been said to “demonstrate the importance of wildness, resistance and imagination” while simultaneously attracting controversy due to his unconventional depiction of nationhood and women. Compared to other Celtic Revivalists such as William Butler Yeats, Synge and his plays are not well known in the Greater China Area despite his fame in Europe and America. However, the fact that nine translators in China and Taiwan have translated Synge’s plays into Chinese since the 1920s is evidence of a degree of popularity. Though impressive, these translations have not been thoroughly vetted, researched, and critiqued.

In this project, I seek to meticulously investigate those Chinese interpretations of Synge’s plays by all nine writers and scholars from China and Taiwan: Guo Moruo (郭沫若), Xu Xuxuan (徐序瑄), Tian Han (田漢), Peng Ching-hsi (彭鏡禧), Ma Ching-chao (馬清照), Chen Ge (陳戈), Tsai Chin-sung (蔡進 松), Chang Tsung-chi (張崇旂), and Hsieh Chih-hsien (謝志賢). To further understand the Sinophonic adoption of Synge’s work, my project studies two dramatic performances of his The Playboy of the Western World. The first of which was staged in Beijing in 2006 and second in Taipei in 2016. My plan is to pursue a diachronic, chronologically ordered, study of the translation and staging of Synge’s plays in the Greater China Area, with a view to addressing a number of critical issues at the time they were transposed for a Chinese-speaking world: the nature and pattern of intercultural translation, the mutuality of western impact and Chinese agency, the problem of the domestication and exoticization of the ancestral literary artifact, the manipulating intervention of ideological imperatives, and the linguistic question of translatability.

To draw a complete and holistic picture of how Synge’s work was received and understood, in addition to analyzing the nine Chinese translations and parsing the two performances, my study will canvass and examine a host of other materials, which will include academic articles and theses as well as newspaper and magazine articles. Vertically, my research contributes to a deeper understanding of the translation, reception, and impact of Synge’s plays in the Greater China Area. Horizontally, my work sheds light on the meanings and implications of the translations of his work as an integral part of the modern Chinese project of cultural engagement with the West.