The first lecture on Jan 22 by Dr. Lucas Kohnke is cancelled due to illness.

The 2nd lecture by Dr. Ruth Wong will continue as planned. The starting time will be postponed to 10:35am. Please note that the details of the lecture on Jan 22nd  will be changed as follows (the changes have been highlighted in red):

Date:
Please refer to each individual lecture for details
Time:
9:30 AM - 12:00 PM
Format:
Online (ZOOM)
Language:
English
Admission Fee:
Free
Target Audience:
Teachers & the general public who are interested in English / language in general
Remarks:
You may register for the whole series or a particular day that interests you.
E-certificates of attendance will be issued to participants. 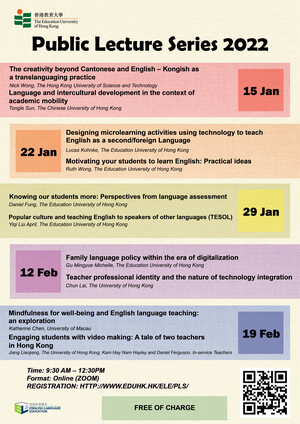 Seminar 1: The creativity beyond Cantonese and English – Kongish as a translanguaging practice (Registration closed)

The term Kongish was coined by the Facebook Page, Kongish Daily in 2015 and used for the very first time to represent the Cantonese-English mix used by Hongkongers, replacing and differentiating from the classic label – Chinglish. The first post of Kongish Daily had attracted over ten-thousand likes and shares overnight, and gained more than thousands of subscribers in less than 24 hours on this one-day-old newborn. It was also the first time Hongkongers recognized a surprising fact – it’s actually alright to use Cantonese-English mix to express themselves freely in the public space. Since then, more and more Kongish usages were discovered and accepted in Hong Kong – in both digital and physical worlds. In this talk, I will “(chai my breast to) put some money in your pocket” by discussing 1) different Kongish practices from the perspective of translanguaging, and 2) how the creativity of Kongish can be realised when we manage to think beyond the boundary of the two named languages – Cantonese and English.

In the daytime, Mr Nick Wong, who does not go to school by bus, is a lecturer in the Center for Language Education, torturing and teaching English to HKUST students. At night, he proclaims himself as the “Chef Editer” (not typo) or a.k.a a "keyboard fighter", writing and sharing posts in Kongish on his Facebook Page "Kongish Daily". Somehow, his night duty is more successful than his daytime one: this daytime nobody has been interviewed by various media for his midnight Kogish project, such as 100Most, Apple Daily, Mingpao, Next magazine, RTHK, SCMP, Singtao, The Straits Times, and even (blessed by) Wenweipo, to name a few. Currently, Kongish Daily has (only) around 70,000 subscribers on Facebook.

Seminar 2: Language and intercultural development in the context of academic mobility (Registration closed)

As internationalization initiatives intensify in secondary and tertiary institutions in Hong Kong, a growing number of students are participating in some form of academic mobility, for example, an international exchange program. It is often assumed that participation in an academic mobility scheme will bring about linguistic gains (e.g., enhanced second language proficiency), intercultural development (e.g., an open, global mindset), and personal transformation (e.g., identity expansion). Contemporary study abroad research has shown that experiences alone are often not sufficient for such development. This presentation centers on a mixed-method, longitudinal study that investigated the developmental trajectories of Chinese students from a Hong Kong university who participated in a semester-long international exchange program. Discussions focus on the complex interplay of internal and external factors that appeared to lead to different sojourn experiences of the participants and resulted in divergent learning outcomes. Implications of the findings for language and intercultural education that spans all phases of the academic mobility cycle will also be discussed.

About the Speaker:
Dr. Tongle Sun is an Assistant Professor in the Department of English at The Chinese University of Hong Kong, where she is teaching undergraduate and postgraduate courses in Applied English Linguistics. Her research interests include language, culture, and identity, language socialization, study abroad, intercultural communication, and English for specific purposes. 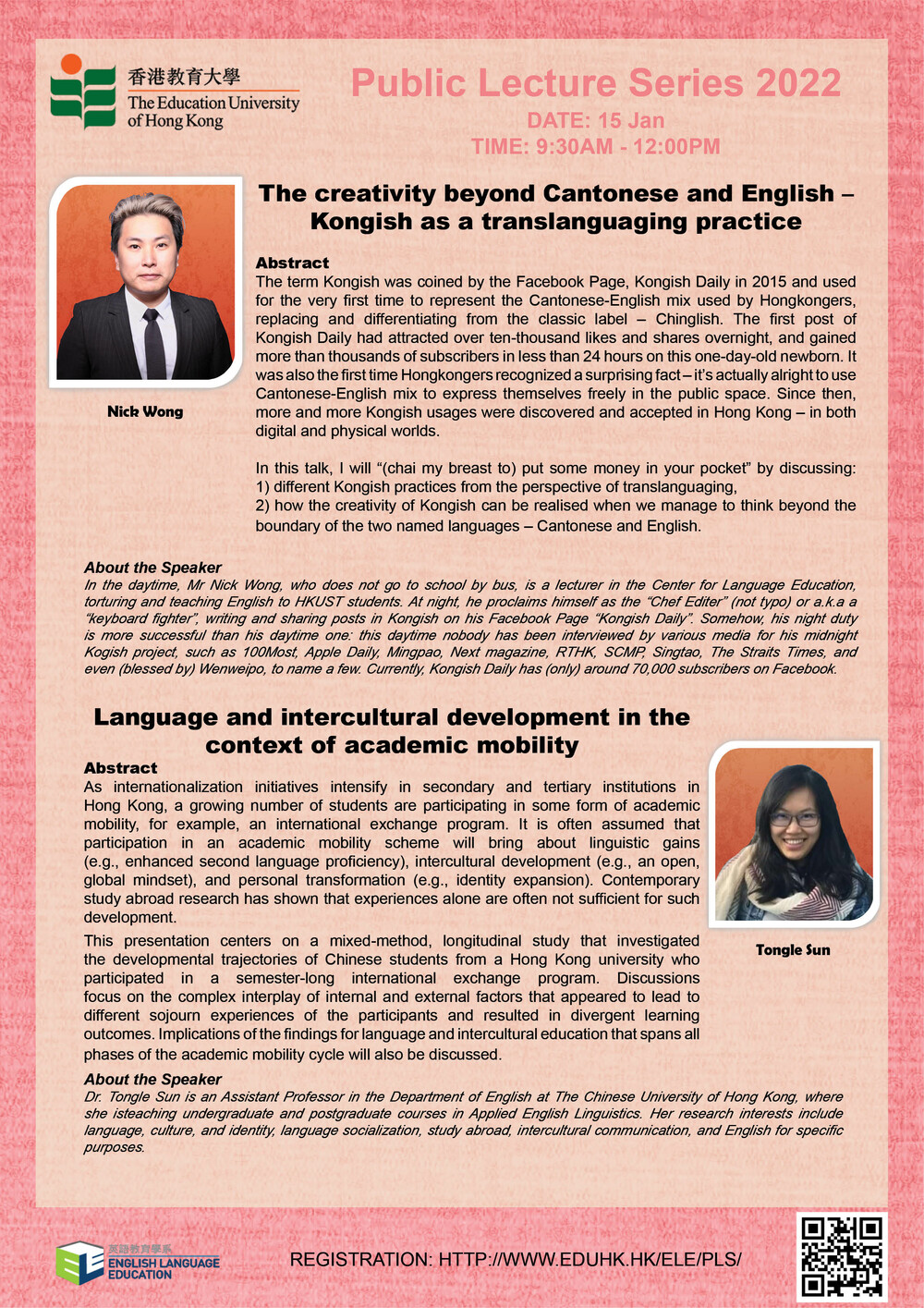 The COVID-19 pandemic has forced English language teachers worldwide to create synchronous and asynchronous student-centred learning environments. The recent change in the educational landscape and advances in technology have prompted the use of bite-sized chunks of educational input known as microlearning experiences. Microlearning is not a new concept, but the increase in mobile learning by English learners and the influx of mobile applications for English language learning has spurred interest in its pedagogical potential.

The adoption of microlearning requires teachers to rethink traditional ways of delivering course content. Microlearning embraces learning formats such as pdfs, podcasts, infographics, videos, augmented reality, and chatbots that allow the delivery of short (2-to-8-minute) important messages or bursts of information. These bite-sized chunks focus on a single idea (e.g. a specific grammar point) to reduce the risk of cognitive overload during learning activities and enable better retention. English language teachers in formal and informal education environments will benefit from exploring the possibilities of microlearning to motivate and engage learners. This talk will provide strategies, tools, and best practices for incorporating microlearning optimized for mobile learning in English language teaching. It aims to help teachers create and deliver microlearning mechanisms that are optimized for mobile learning.

Dr. Lucas Kohnke is a Senior Lecturer in the Department of English Language Education, The Education University of Hong Kong. He holds a doctorate in Education from the University of Exeter, which explored educational technology in language teaching at the tertiary level, with a special focus on the professional development of English language teachers. His main research interest lies in technology-supported teaching and learning, teacher professional development using information communication technologies, and EAP/ESP course design.

Motivation is a crucial factor in the success of students at all stages of their education. Teachers can play a pivotal role in facilitating student learning motivation. In this seminar, the speaker will provide practical ideas for teachers to motivate students to learn English from different perspectives.

About the Speaker:
Dr. Ruth Wong is an Associate Head of English Language Education Department, The Education University of Hong Kong. Her research areas include student learning motivation, teaching pedagogy and cultural issues related to education.  She has published textbooks, professional articles and research papers in various international journals. 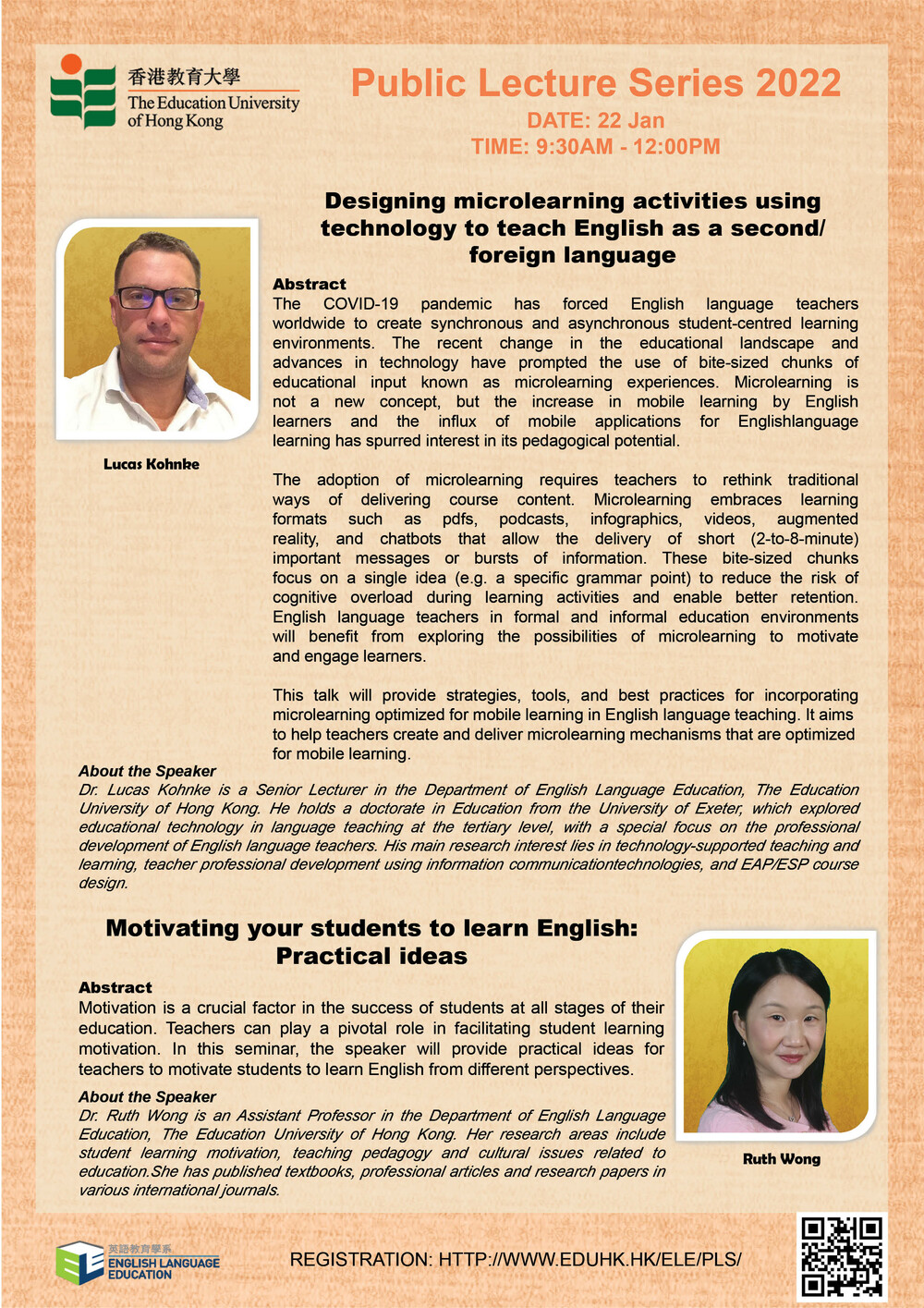 About the Speaker:
Yiqi LIU (April) is an Assistant Professor in the Department of English Language Education, The Education University of Hong Kong. Her main research interests include discourse analysis, sociolinguistics, critical cultural studies and bilingual education. Yiqi’s recent publications have appeared in major international journals such as Discourse and Communication, Assessment & Evaluation in Higher Education, International Journal of Bilingual Education and Bilingualism and Critical Inquiry in Language Studies. 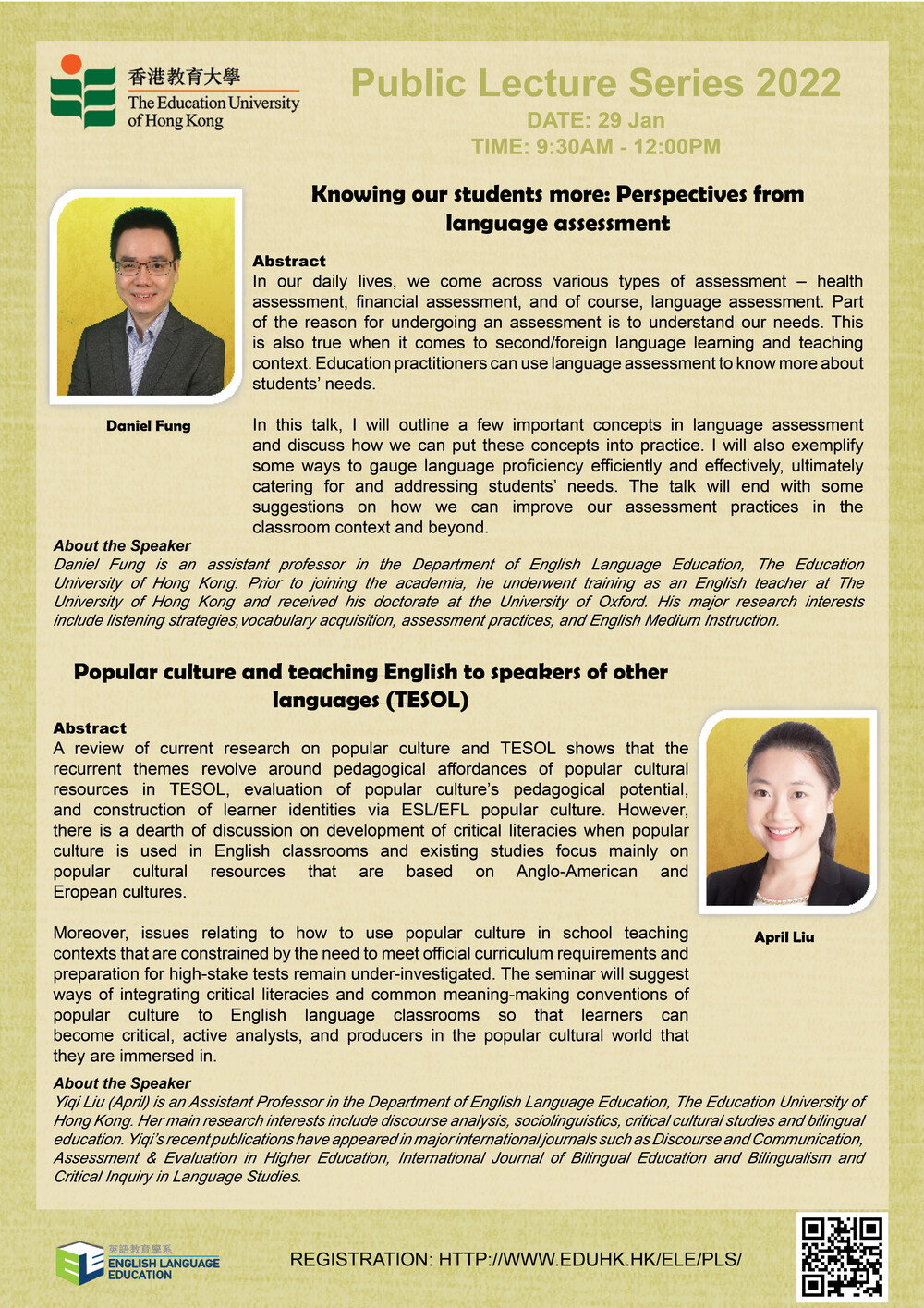 Language policymaking in family domains is influenced by multiple and sometimes blurred forces from both inside and outside the household. While family language policy (FLP) has received increased research attention, especially over the past decade, there has been a lack of research on the hybrid language practices of family members across virtual and physical spaces. In this seminar, I elaborate how family members’ language and literacy practices on social media can enahnce children’s multilingual proficiency, which they could draw on for meaning construction in school context. The findings have implications for making effective and culturally congruent FLP decisions through collaborative efforts and adjusting teaching practices.

About the Speaker:
GU Mingyue Michelle is an associate professor of Department of English Language Education, Faculty of Humanities, the Education University of Hong Kong. Her research interests include family language policy, multilingualism and mobility, identity studies, and minority education. She has published widely in the above fields. She received the Research Excellence Award in 2017 and Young Researcher Award in 2015 at the Chinese University of Hong Kong when she worked as an assistant professor there.

While in theory teachers (linguists included) might claim ‘all languages are equal’, in practice some languages are treated more equally than others. Despite several years of sociolinguistic research indicating all ‘non-standard’ varieties are equally rule-governed and well-formed systems as standard varieties, prejudices continue to exist in our society, including among teachers. Arguably, since beliefs are strong indicators of teachers’ behaviors in the classroom, this has serious implications for teacher education and professional development. In this talk, I will explain why teachers continue to hold these beliefs despite persuasive evidence to the contrary, even when the outcome is less than satisfactory. Drawing upon research into the science of beliefs and primary data collected from Indian teachers, I will discuss how long-held beliefs continue to go unchallenged and adversely affect teachers’ behaviors and student learning outcomes.

About the Speaker:
Chun Lai is an associate professor at the Faculty of Education, the University of Hong Kong. Her research focuses on technology and language education, examining the use of technology among teachers and learners to enhance language teaching and learning. She has researched various aspects of this research issue, and has published widely on this topic. 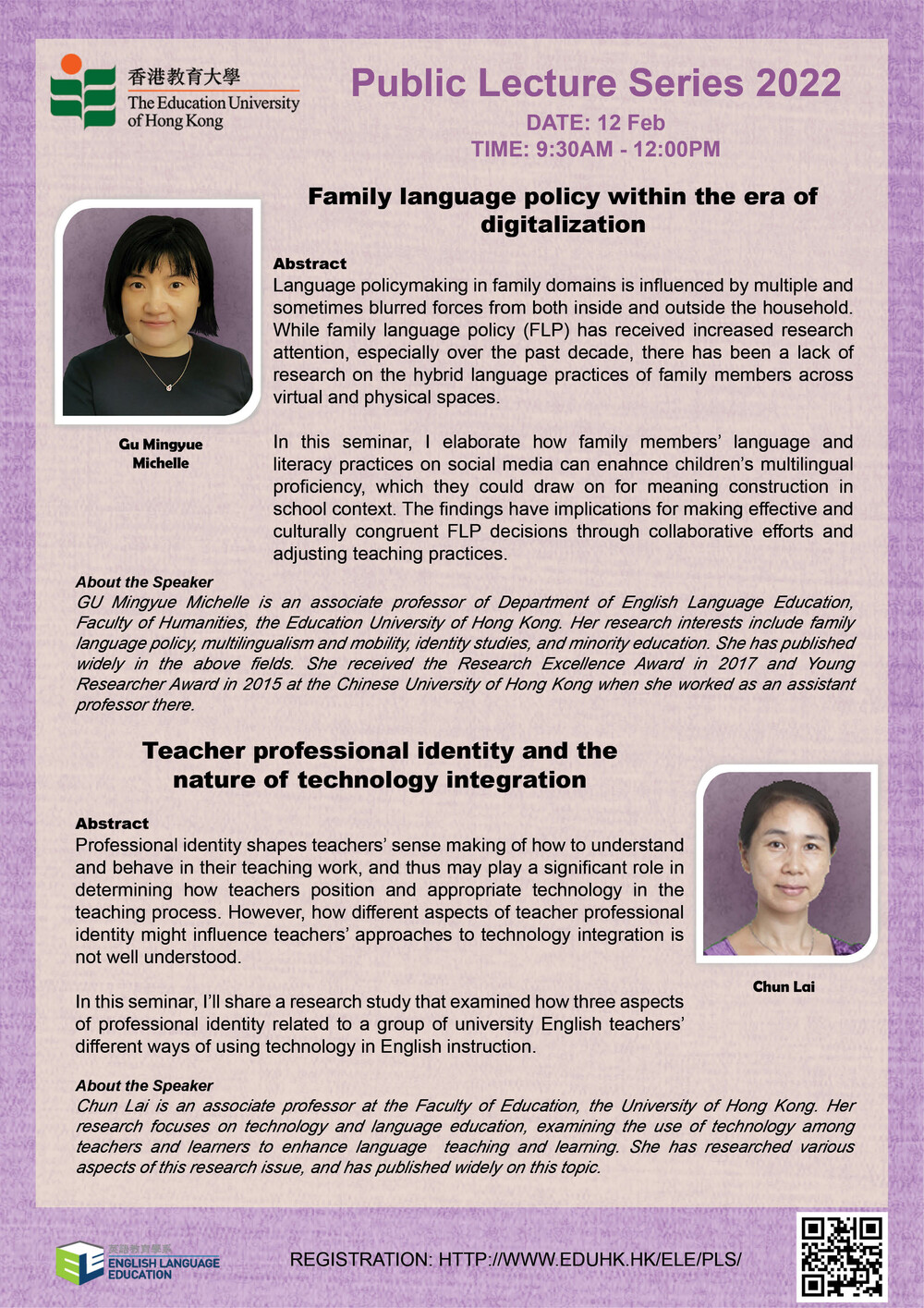 Neuroscientist Richard Davidson concludes his decades of research in mindfulness that “well-being is a skill”, and that “if one practises the skill, one would get better at it”. In the first half of this talk, I will briefly review what we know so far about the scientific study of mindfulness for well-being: what it promises and what it has not proven. In the second half of the talk, I will review the current application of mindfulness in the field of English language teaching, and explore potentials and possibilities for mindfulness to improve teacher (and learner) wellbeing, as well as providing some examples of mindfulness application in the English language classroom.

The public and research interest in mindfulness have exploded exponentially in the last two decades with what may seem like a jungle of mindfulness information, programmes, and products. I will also advise how best to navigate in this jungle, and suggest where we can learn the skill from trusted sources and professionals, and where to go for support if a teacher wants to take it further to the classroom.

About the Speaker:
Dr. Katherine Chen is Associate Professor of Applied Linguistics and Director of the English Language Centre at the University of Macau. She had previously taught at the University of Hong Kong and the University of Michigan, and had trained international PhD students to be instructors in Michigan. Her research specialities include language ideologies and identities, multilingualism and transnationalism, the discourse and application of Mindfulness. She has completed Mindfulness-based Cognitive Therapy for Life foundational teacher training programme with the University of Oxford Mindfulness Centre. Learn more at https://sites.google.com/view/katherine-chen/mindfulness

Recent research shows that video making can be regarded as a form of digital multimodal composing and can be used as a valid English learning activity in TESOL classrooms. Yet can P1-P6 students be engaged with video making as well? What might be the benefits and trade-offs? What forms of teacher scaffolding may be needed? This talk will begin with a theoretical framing of video making, followed by narratives of one NET teacher and one local teacher in Hong Kong.

Kam, Hay Nam Hayley, is a local English teacher who teaches at a local government-aided primary school. Having taught a school-based curriculum and traditional textbooks, she is a believer in teaching grammar in context. She is also fond of exploring different e-learning tools to motivate students in learning the second language. She loves involving my students in creating video content for teaching English. Students can learn English in a fun way, regardless of their English proficiency. They can also have a taste of being a superstar. Students can be teachers as well!

Daniel Ferguson is from the UK and has been an English teacher in a local government aided primary school here in Hong Kong under the Primary Native English Teacher (PNET) scheme since 2012. His current area of interest is Assessment for Learning (AfL). 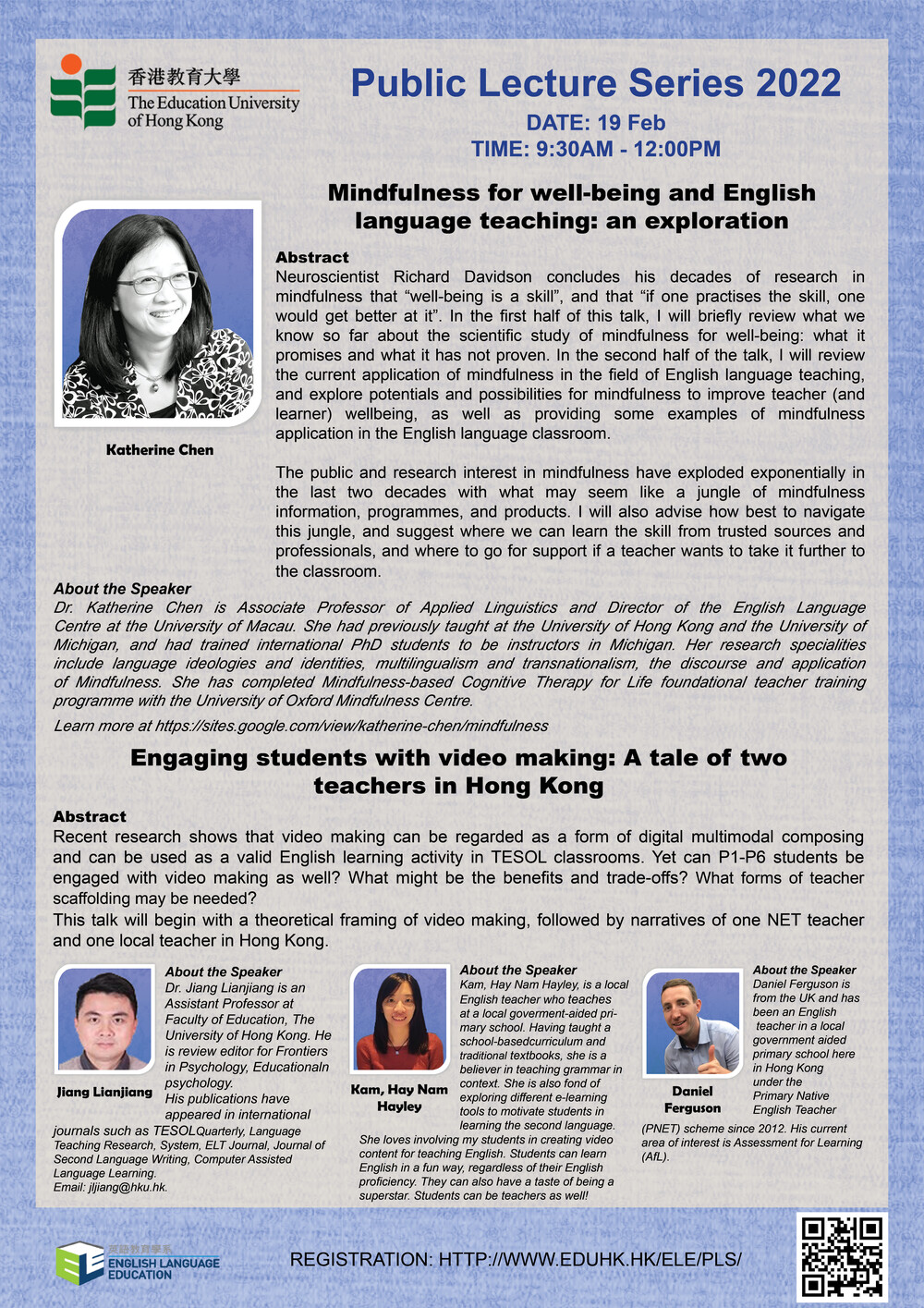 E-Certificate of attendance will be issued to participants. 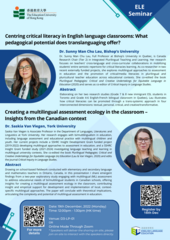 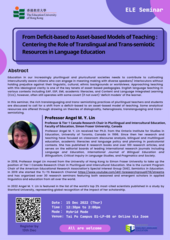 From Deficit-based to Asset-based Models of Teaching : Centering the Role of Translingual and Trans-semiotic Resources in Language Education 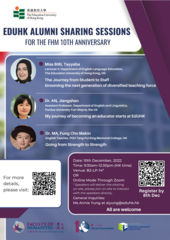