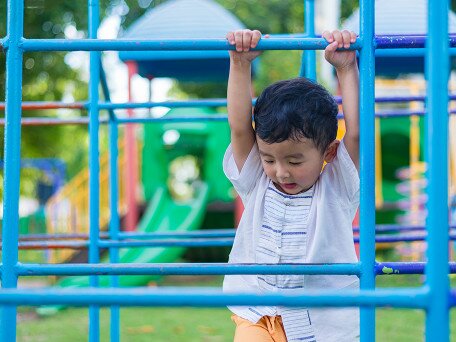 Autism spectrum disorder (ASD) is a neurodevelopmental disorder evident from early childhood. Children with ASD are characterised by impaired social interaction and communication skills, along with the presence of restricted and repetitive behavior and interest. Apart from these core features, cognitive deficits are also commonly found in the population and have been conceptualised as an associated neuropsychological feature. Literature has shown that executive dysfunction in children with ASD is closely associated with their language development, motor skill acquisition, and restricted and repetitive behavior patterns. Therefore, it is important to develop an effective intervention strategy that targets cognitive impairment in the population. One intervention strategy that has received a growing amount of attention is physical activity. In typically developing (TD) children, numerous studies have confirmed the cognitive benefits of physical activity on executive function (e.g., improved attention, enhanced working memory). It is therefore natural to extend the study to examine whether physical activity could also benefit cognition in children with ASD. Despite the positive findings of previous studies involving physical activity and children with ASD, many of them contain inherent methodological flaws (e.g., small sample size, lack of transfer task) and therefore questions about their efficacy are raised. We aim to investigate the effectiveness of physical activity for improving cognition in children with ASD. We also aim to investigate the underlying mechanisms behind the exercise-cognition relationship. Some researchers maintain that exercise is likely to trigger neurotrophic/biochemical effects whereas others maintain that motor control/learning is likely to trigger psychological effects. The combination of the two is likely to be particularly efficacious. In the proposed study, we will investigate how physical activity impacts executive functions in children with ASD using a theoretical model of self-regulation. Self-regulation, an ability to monitor and control one’s own behaviors and alter them according to environmental demands, is thought to promote cognition through physical activity that requires mental effort and attention. In this study, we will conduct a randomised controlled trial of 90 child participants with ASD that compares the executive functions of a learning to bicycle group, a stationary cycling group and a Hawthorne-effect control group receiving standard care. Executive functions reflected by four components (i.e. planning, flexibility, working memory and inhibition) and physical activity level will be assessed before the intervention (T1), immediately after the 12 weeks of physical activity or regular treatment (T2), and 12 weeks post-intervention (T3) to examine the sustainability of the intervention effects. Self-regulation level will be assessed by the Response to Challenge Scale. The findings of this proposed study can provide information on the mechanism by which physical activity impacts cognition in children with ASD, which may ultimately lead to the design of an effective intervention to improve the cognition, motor performance, fitness, and functional independence of children with ASD.

Resolving the Mystery of Deep Learning by Statistical Physics